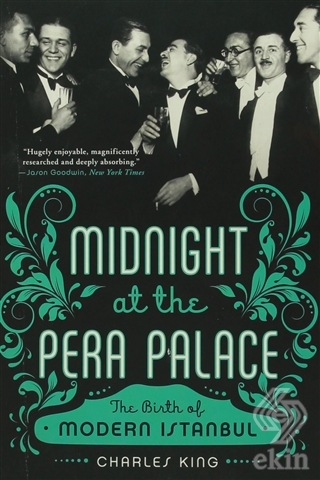 Midnight at the Pera Palace

'Popular history at its best, authoritative and hugely entertaining. Few places were as colorful as Istanbul between the wars, and Professor King captues all the chaotic biro and contradictions of a city, and a culture, reinventing itself.'

Istanbul Between The Wars:the hub of modern cosmopolitanism at the heart of the Islamic world. Spies, jazz dancers, revolutionaries, beaty queens, and diplomats all plied their trades. While a multiethnic Ottoman Empire transformed itself into a Turkish republic, Istanbul remained a global crossroads, hosting Russian exiles, Jewish refugees, and larger-than-life figures such as Mustafa Kemal Atatürk, Leon Trotsky, the future Pope John 23, and Muslim feminist Halide Edip. Scrupulously reseached and eleganrty written, this kaleidoscopic portrait it also a modern parable of the perils of nationalism.

'A mare's nest of intrigue, violence, sex and espionage, all set against the slow dimming of Ottoman magnificence. I loved this book.'

- Robert D. Kaplan, author of The Revenge of Geography

Charles King is a professor of international affairs and government at Georgetown University. A freQuent media commentator on global issues, he is the author of Odessa and other books. He lives in Washington, DC.