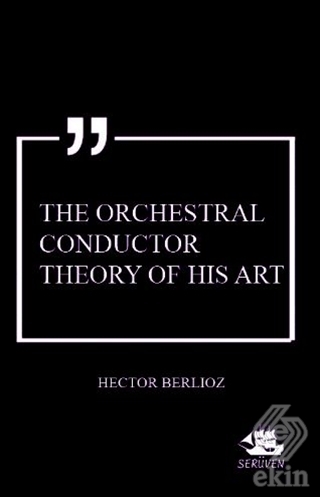 The Orchestral Conductor Theory of His Art

https://www.ekinkitap.com/the-orchestral-conductor-theory-of-his-art
The Orchestral Conductor Theory of His Art
Serüven Kitap
53.60

The orchestral conductor should see and hear; he should be active and vigorous, should know the composition and the nature and compass of the instruments, should be able to read the score, and possess—besides the especial talent of which we shall presently endeavor to explain the constituent qualities—other indefinable gifts, without which an invisible link cannot establish itself between him and those he directs; otherwise the faculty of transmitting to them his feeling is denied him, and power, empire, and guiding influence completely fail him. He is then no longer a conductor, a director, but a simple beater of the time,—supposing he knows how to beat it, and divide it, regularly.
The performers should feel that he feels, comprehends, and is moved; then his emotion communicates itself to those whom he directs, his inward fire warms them, his electric glow animates them, his force of impulse excites them; he throws around him the vital irradiations of musical art. If he is inert and frozen, on the contrary, he paralyzes all about him, like those floating masses of the polar seas, the approach of which is perceived through the sudden cooling of the atmosphere.